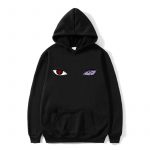 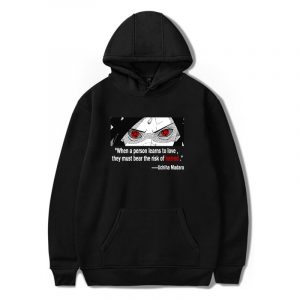 After Itachi’s death. Sasuke’s Mangekyou Sharingan awakened. making him even more powerful but not without drawbacks as prolonged use of the Mangekyou Sharingan would deteriorate his vision and cause bleeding out of his eye. It is only after getting his brother’s eye transplanted that he gained the “Eternal Mangekyou Sharingan”. basically an ameliorated version of Mangekyou since the user doesn’t get the side-effects of it. Some might be surprised but Sasuke also benefited of the Rinnegan just after receiving half of Hagoromo’s chakra. which is considered as the precursor and the origin of shinobi. a god-like figure. Sasuke Sharingan and Rinnegan makes him able to use techniques coming from both of the dojutsu like attractive/repulsive force through the Deva Path or the Amateratsu. eternal burning flame. This Sasuke Sharingan and Rinnegan Sweatshirt puts an honor to Sasuke’s power! Comes in many different colors for your greatest pleasure.