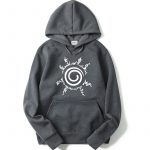 Coming from the Uzumaki Clan. Naruto posesses a mark that lies on its stomach. Have you ever wondered what is was ? Well. it is documented that the Uzumaki. originally coming from Uzushiogakure was a group of shinobi greatly capable in sealing jutsu. which be either sealing a spirit into an object or a body… Minato had a children with Kushina Uzumaki and was naturally taught of some of the sealing jutsu! When it was needed. during the attack of Konoha by Kurama. the Nine-Tailed Beast. Minato used a sealing jutsu to seal the demon in his son. By the way. we see the mark in the first episodes of the Naruto Series. We just love the design that was made for this seal and decided to create a Naruto Seal Hoodie for the fans! Coming in various colors. the Naruto Seal Hoodie is very sober in design and therefore allow a great choice for style blending. Made out of 65% cotton. you will just love how the hoodie feels to the touch and more importantly. you will love to wear it!

Be the first to review “Naruto Hoodie Seal” Cancel reply