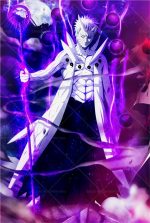 Obito had a very sad life… Almost dying at an early age. crushed by a giant rock. only to be saved and manipulated by his elder Madara Uchiha who was also believed to have died during the fight against Hashirama. the God of Shinobi. During the Fourth Shinobi World War. Obito succeeding in making himself a jinchuriki for the Ten-Tailed Beast. resulting in him changing form. This Obito Poster shows his jinchuriki form. he strongly ressembles to an Otsutsuki clan member. Those Naruto Posters all have a support base in canvas and have been spray-painted. The oil is a medium. a liquid that is used in order to improve the performance of the painting. It will allow a better uniformity. consistency of the painting. Check out the size chart form if you need detailed information. you’ll be able to perfectly consider what’s going to fit on your walls. Don’t wait and get your Naruto Posters. they are only waiting to be hung on your bedroom wall! Be the first to review “Obito Poster” Cancel reply